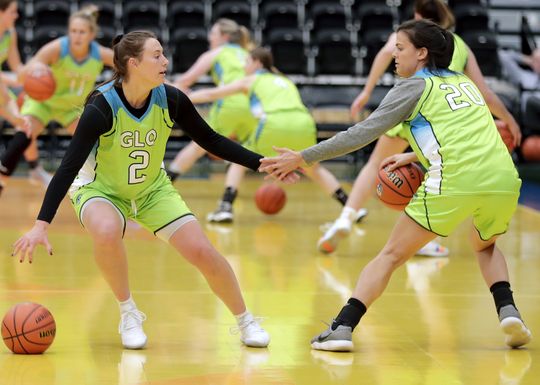 OSHKOSH-  The Wisconsin Glo is one of five teams in the Global Women’s Basketball Association, established in 2016. According to the association’s website, “the GWBA provides an opportunity for athletes to pursue a professional career beyond their collegiate and amateur success.”

That opportunity begins Friday for Kraker and her 11 teammates as the Wisconsin Glo starts their season at home against the Flint Monarchs. It’s a quick turnaround for the team, which began practice Tuesday.

General manager Brad Fischer said he was intentional in choosing Wisconsin athletes who have relationships with each other, whether as teammates or competitors, to play with the Glo. It was a way for him to create instant chemistry without many practices.

“The season is going to go fast,” Fischer said. “You need some of those preexisting relationships and familiarity to kind of help things out.”

The Glo plays 12 games before the playoffs. Two of them are during the team’s inaugural weekend.

Fischer said Oshkosh is quickly becoming one of the basketball capitals of the state.

“There’s no one else that has a pro men’s team, a pro women’s team, and we’ve obviously got our college teams and high school teams,” Fischer said. “People now look at Oshkosh as one of those cities where basketball is a big deal.”

“I think this is the best women’s basketball team that’s ever been assembled in Wisconsin,” Fischer said.

Dan Carey, who describes himself as a high-energy, passionate and positive coach, said fans will be drawn to the Glo for its exciting brand of basketball.

Carey, a staple in Wisconsin coaching from high school to UW-Milwaukee, has three young daughters, ages 3, 5 and 8. He’s looking forward to them spending the summer in the gym alongside these talented female athletes. It’s something the coach thinks the entire state can get behind.

Fischer said the purpose of this league is not just to expand women’s basketball in Oshkosh or Wisconsin, but across the country. It’s another opportunity for female athletes to play professional basketball after college without heading overseas.

For Kraker, whose family traveled to nearly every UW-Green Bay basketball game, it’s a chance for them to see her take the court close to home. That’s what she said she missed the most about playing overseas in Spain.

“Just taking the court again with people that are familiar to me and in my home state again. I think we’re all really excited,” Kraker said. “The girls that are on the Glo team are a phenomenal crop. It really is a testament to Wisconsin women’s basketball.”