GLO pull away from Monarchs in Preseason Game Finale 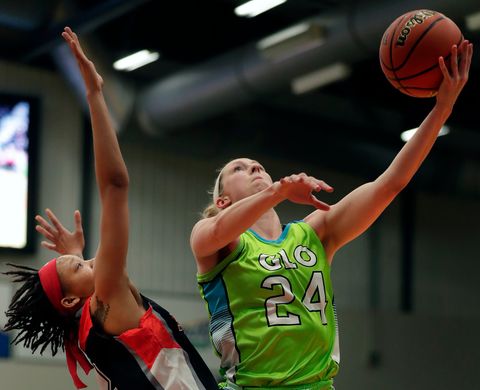 Ortiz led all players with 22 points to go along with eight rebounds and three assists. Ortiz, averaging 20 points per game in the GLO’s two exhibition contests, went 8-for-12 from the floor Saturday, including 6-for-9 from beyond the arc.

LeClaire, who scored 10 of her 20 points in the fourth quarter, added a team-leading 11 rebounds and four assists.

Rodriguez finished the game with nine points while Mehryn Kraker had eight in a reserve role. GLO starter Sam Logic contributed six points and paced the team with nine assists and three steals.

Wisconsin scored the first five points of the game and built a 15-4 lead midway through the first quarter before Flint pulled within 20-18 early in the second quarter. The GLO then responded with 13 unanswered points, including seven from Ortiz, for a 33-18 advantage with just under four minutes play in the first half.

Trailing 34-27 at intermission, the Monarchs claimed their first lead of the game at 50-49 late in the third period and took a 52-49 advantage into the final quarter.

LeClaire ignited the GLO’s ensuing 10-point run with a basket at the 9:11 mark of the fourth period. Rodriguez gave Wisconsin the lead for good at 54-52 with a 3-pointer 34 seconds later, and the GLO capped the run with a layup by LeClaire and a 3-pointer from Ortiz.

The GLO owned their largest lead of the night when Rodriguez drilled a 3-pointer that provided the final score with 31 seconds to play.

Arlesia Morse led four Monarch double-digit scorers with 15 points on 6-for-22 shooting from the floor.

Morgan Neeley chipped in 13 points off the Flint bench while starters Brandie Baker and Rachel Kehoe both added 10. Kehoe pulled down a game-high 12 rebounds.

The GLO also beat the Monarchs, 88-58, in Wisconsin’s franchise debut Friday, May 10 in Menominee Nation Arena. Flint had compiled a 21-3 record the previous three seasons en route to winning each of the GWBA’s postseason titles.