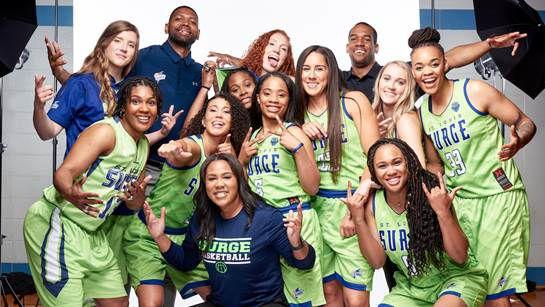 The city of St. Louis has been begging for a professional basketball team ever since the loss of the former NBA St. Louis Hawks, now the Atlanta Hawks, in 1968. In 1973, the city acquired the Spirits of St. Louis, an ABA-NBA merger team. Their franchise was short-lived, shutting down in 1976. Who knew that 35 years later a professional basketball team would once again reign in the city? Only this time, women’s basketball would become the talk of the town.

The St. Louis Surge is the only pro basketball team to make a consistent impact in the St. Louis area in over 30 years. In seven seasons, the Surge has competed in six national championships, amassed a ton of points (104 points per game last season), and has given the community plenty to cheer about on and off the court with over 1,000 hours of community service.

The St. Louis Surge organization seeks to revolutionize the impact of sports in the community. By recruiting character first, they ensure continued success on and off the court. The roster, which consists of NCAA All-Americans from across the country who are graduates with advanced degrees, are active in the community as well as on the court. The Surge believes in building the leaders of today and tomorrow.

Season ticket holder Michele Martin is a proud supporter of the Surge’s philosophy: “We are fans of the Surge because we love what they stand and love the experience when we bring our family and friends to games!”

The Surge will host five home games in 2019. If you have never been, you are in for a treat. Each game features plenty of giveaways, access to the players before and after the games and more.

Owner and general manager Khalia Collier explains, “A Surge game is an amazing experience with a great product at a great price.”

The home opener is June 8 at 6:05 pm. Game Day tickets prices range from $10 – $15, and children under 4 are free. You may purchase online in advance or at the door. Season tickets are selling quickly, so be sure to visit Metrotix or stlsurgebasketball.com/tickets to purchase. Season ticket holders receive VIP seating, free parking and private meet and greets with Surge players and staff, and much more.