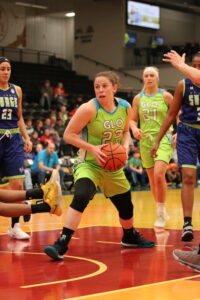 The Wisconsin GLO’s first game in the Global Women’s Basketball Association was a resounding success.

The GLO (3-0, 1-0 GWBA) led the entire way after Sam Logic scored the first four points of the game. Wisconsin went on to build a 43-29 cushion at halftime and led by as many as 28 points during the final period.

Ortiz, who has led the GLO in scoring each game this season, is averaging 19 points per game on the year.

Logic added 16 points and a game-best five assists for the GLO, who also received 14 points Kelly Moten, 11 points from Jolene Anderson and 10 points from Steph Kostowicz.

Allie LeClaire chipped in seven points for Wisconsin while Jessica Lindstrom had six points and led all players with 15 rebounds. Anderson, who went 3-for-5 from 3-point range, and Lindstrom made their first appearances with the GLO since concluding their professional seasons overseas.

Wisconsin outshot St. Louis, 46.6 to 31 percent, from the field and outrebounded the Surge, 48-37. The GLO, scoring 86.3 points per game, have won their first three games in franchise history by an average of 25 points as Wisconsin is holding opponents to 30 percent shooting from the floor on the year.

Logic and Kostowicz combined to score 10 of the team’s first 12 points as the GLO raced out to a 12-4 lead midway through the first quarter. Anderson then beat the buzzer with a 3-pointer that extended the Wisconsin advantage to 24-16 after one period.

The GLO upped their lead to 64-44 entering the fourth quarter and owned a 28-point cushion on eight occasions during the final 10 minutes. Ortiz drained a 3-pointer for a 72-44 lead at the 8:30 mark of the fourth quarter before a pair of Merissa Quick free throws matched the GLO’s largest lead for the last time at 92-64 with 24.1 seconds to play.

Jaleesa Butler led St. Louis with 14 points off the bench. Nakiah Bell finished with 12 points for the Surge on 4-for-6 shooting from beyond the arc.

The GLO and the Surge were both making their GWBA debuts. St. Louis (0-1) compiled an 87-15 record over the previous seven seasons, winning two championships in the Women’s Blue Chip Basketball League during its six trips to the title game.

The Wisconsin GLO return to the court Saturday, June 1 with a road game against the Music City Icons in Nashville, Tennessee.