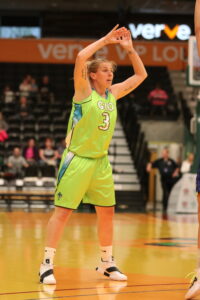 Wisconsin GLO guard Jolene Anderson was named the Global Women’s Basketball Association’s Player of the Week for her double-double performance at the Music City Icons on June 1.

Anderson had 20 points and 10 rebounds during the GLO’s 88-45 victory over the Icons last Saturday in Nashville, Tennessee. Anderson is averaging 15.5 points in two games since joining the GLO on May 18.

“Jolene was outstanding on both ends of the floor,” GLO head coach Dan Carey said.  “She set the tone early in the game aggressively hunting her shot, going to the offensive glass and defending with physicality.  Her fingerprints were all over the game in Nashville.”

With their win over Music City, the Wisconsin GLO improved their record to 4-0, including 2-0 in the GWBA. The GLO have won the first four games in franchise history by an average of 29.5 points.

Anderson, the all-time leading scorer in University of Wisconsin history, is in her 12th season as a pro. Prior to joining the GLO, the 2004 Wisconsin Miss Basketball and 2008 Big Ten Player of the Year played professionally in the WNBA and in Europe.

“She has also been an elite teammate who has connected instantly with our players and coaching staff,” Carey said.

The Wisconsin GLO return home to host the Chicago Breeze for a non-league game Saturday, June 8 at Menominee Nation Arena in Oshkosh. The June 8 contest will feature a bobblehead giveaway and mark the GLO debuts of Janel McCarville, the 2005 WNBA top overall pick and former WNBA champion, and UW-Green Bay All-American Julie Wojta.