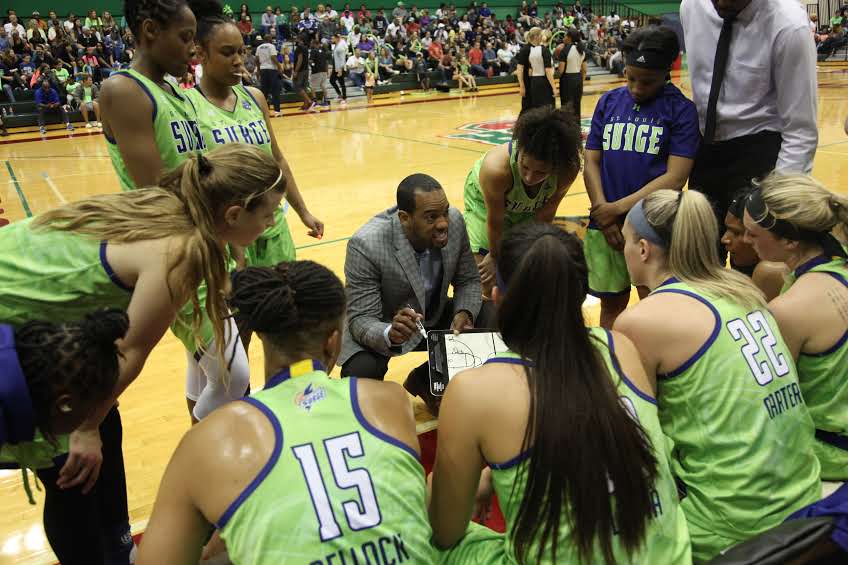 From tip, the St. Louis Surge felt a jolt from the packed crowd at the 2019 Home Opener and 100th Game Celebration. Guard Nici Gilday opened the night’s scoring with a 3-pointer from the right corner, her first basket as a member of the Surge. The opening quarter was all Surge, as the home team charged to a 30-16 lead, powered by guard Rebecca Harris, who poured in 10 points, including two 3-pointers, in the first frame.

The Flint Monarchs punched back in the second quarter, outscoring the Surge 27-20 and shrinking their halftime deficit to just seven with a score of 50-43 Surge. The Surge lost much more than just half their lead in the second quarter, though, as Harris went down with a minor injury with about two minutes remaining in the first half. She remained in the locker room for the balance of the half, yet led the team with 16 points at the halfway mark.

Harris returned for the start of the second half, and with her the Surge’s fortunes briefly turned for the better. The Surge roared ahead to a 70-48 lead, but the Monarchs responded, getting stops and gashing St. Louis in transition. Flint cut the Surge lead to just 75-68 by the end of the third quarter. Despite the early Surge run, the two teams were even with 25 points each in the third frame.

In the pivotal fourth and final quarter, the Surge came out strong, quickly extending the lead to double digits and never looking back. By the time the final buzzer sounded, the Surge had blown the game open, owning a 105-89 advantage.

Throughout the game, it was impossible to ignore Harris’ impact. After missing the Surge’s 66-92 loss to the Wisconsin GLO in the season opener, Harris, the team’s leading scorer at 24.2 points per game in 2018, was utterly dominant, raining hell from deep and dropping in all sorts of off-balance runners, turnaround jumpers, and circus layups from 2-point range. She finished the game with a staggering 35 points. In her Surge debut, Gilday was another major bright spot from the moment the game tipped through its final moments, contributing 17 points, pushing the ball in transition, and playing pesky defense.

The Surge’s 2019 Home Opener  and 100th Game Celebration was a rousing success. The hometown team came away with its first win of the season, improving its record to 1-1. Last year’s leaders returned and starred, new additions emerged and shined. Join the Surge next week on Saturday, June 15th in a rematch as they seek revenge for their loss against the Wisconsin GLO in the season opener. The game will be played at Washington University’s Field House at 3:05 pm. Tickets are available for purchase here and at the door. Go Surge!