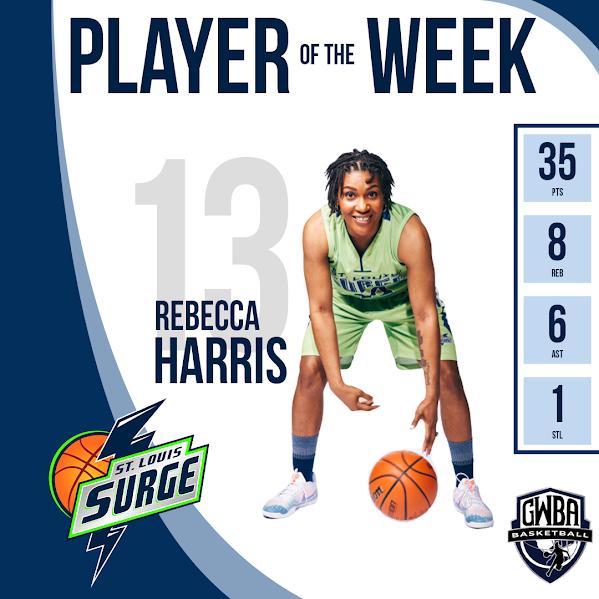 St. Louis Surge guard Rebecca Harris was named the Global Women’s Basketball Association’s Player of the Week for explosive performance versus the Flint Monarchs on June 8.  Rebecca was the driving force for the victory with 35 points on 9/11 from 2, 4/8 from 3, and 5/5 from the line. She also chipped in a team-leading 8 rebounds and was second on the team with 6 assists.

Rebecca’s dominant performance was not without hiccup. She started the game incredibly hot, pouring in a staggering 10 points in the opening quarter.

After a tense halftime, Harris returned triumphantly to the floor, where she piled up 19 second-half points to secure the Surge victory. Rebecca’s grit and determination with winning were just as apparent last Saturday as her incandescent scoring.

Rebecca missed the Surge’s season opener in Wisconsin, which saw the Surge fall 92-66 to the GLO. With Rebecca back, the Surge experienced a major turnaround, winning the team’s home opener 105-89 over the Flint Monarchs.

The Surge feel confident against any opponent but will need another flawless performance to dethrone the undefeated Wisconsin GLO in a rematch game Saturday, June 15th.