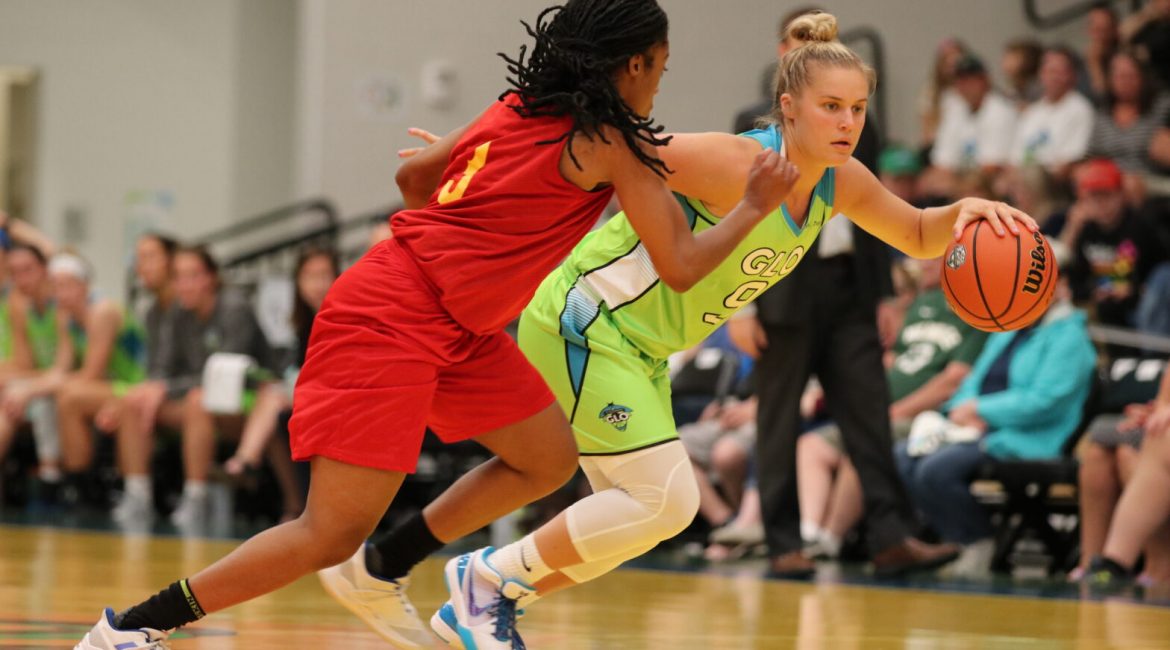 The Wisconsin GLO scored the first 20 points of the game and remained unbeaten atop the Global Women’s Basketball Association standings with a convincing 128-56 home victory over the Music City Icons on Saturday, June 22 at Menominee Nation Arena.

The GLO (8-0, 4-0 GWBA) featured seven double-digit scorers on the way to their highest point total of the season. Wisconsin, which scored at least 30 points in each quarter, owned a 34-5 lead after one period and 65-21 at halftime.

Taylor Wurtz paced Wisconsin with 18 points while Gaby Bronson and Steph Kostowicz added a season-high 16 and 14, respectively, off the GLO bench. Wurtz continues to lead the squad in scoring at 17.8 points per contest.

Jolene Anderson had 14 points of her own for the GLO, who also received 12 from Julie Wojta, 11 from Sam Logic and 10 from Gabbi Ortiz, who returned to the starting lineup after missing the previous three games.

Rounding out the GLO scorers on their record-setting night were Kelly Moten with eight points, Laura Johnson with seven, and Alex Cohen, Allie LeClaire and Jessica Lindstrom with six each. Lindstrom grabbed a game-high 14 rebounds, including seven on the offensive end, while Logic had eight bounds and led all players with seven assists. Moten collected a team-leading four steals.

The GLO finished the game with commanding advantages of 73-24 in rebounds and 33-6 in assists. Wisconsin, in its inaugural season, established its franchise game rebounding record and also set new team marks for made field goals (52), field goal attempts (95) and offensive rebounds (20) while matching its record for assists.

Wisconsin’s game-opening 20-point run, which began with back-to-back 3-pointers, was highlighted by eight points from Wurtz and six from Anderson before the Icons ended their drought on a 3-pointer by Calisha Clark more than six minutes into the game.

The GLO outshot Music City, 58.3 to 13.3 percent from the floor, during the first quarter and held a 19-5 rebounding edge after the first 10 minutes.

Wisconsin then rattled off 15 unanswered points to extend its lead to 37-5 just 12 seconds into the second period. Bronson accounted for seven points and Kostowicz had six during the GLO’s 15-point spurt.

The GLO proceeded to increase their cushion to 50 points at 87-37 following a 3-pointer by Wojta with two minutes left in the third quarter, surpass 100 points on a long-range jumper from Ortiz at the 8:22 mark of the fourth quarter, and claim a 60-point advantage at 108-48 on a 3-pointer from Bronson with 6:54 remaining in the game. Wisconsin led by as many as 74 points at 128-54 after a basket by Bronson with 38 seconds to play.

Wisconsin, which limited the Icons to a .296 field goal percentage, have not allowed an opponent to shoot better than 37 percent from the floor this season. The GLO, winning by an average of 45 points per game on the year, are scoring 98.3 points per contest this season, including 114 per game over their last three contests.

The GLO remain at home to host the Chicago Breeze at 3 p.m. Sunday, June 23 in Menominee Nation Arena.