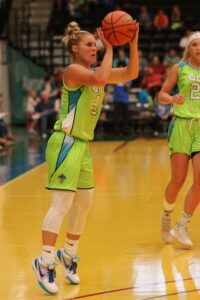 Ortiz drilled a 3-pointer on the opening possession of the game as the GLO jumped out to a 20-0 lead en route to improving their record to 8-0 on the season and 4-0 in the GWBA. She went on to dish out each of her five assists in the second half as Ortiz and six other double-digit scorers led the GLO to their highest point total of the year.

Ortiz then closed out the weekend with 15 points, three rebounds and three assists in Wisconsin’s 121-53 non-league victory at home over the Chicago Breeze on Sunday, June 23. She is now averaging 16.2 points, 4.5 rebounds and 3.3 assists while shooting 18-for-39 from 3-point range in six games with the GLO.

Ortiz, Wisconsin’s Miss Basketball in 2014, helped Team USA’s U19 squad win gold medals at the 2015 World Championship and capped a standout collegiate career at Oklahoma ranked among the Sooners’ all-time top 10 in assists, made 3-pointers and free throw percentage. Before suiting up for the GLO, Ortiz was invited to camp with the WNBA’s Los Angeles Sparks and guided her professional club to a league title in Spain.

Wisconsin is scoring 100.8 points per game in its inaugural campaign and winning by an average of 47.7 points per contest.

Ortiz and the GLO hit the road for a non-league game at their GWBA rival St. Louis Surge on Sunday, June 30. Wisconsin can clinch the outright league title July 13 during its final regular season home game of the year against the three-time reigning GWBA champion Flint Monarchs.