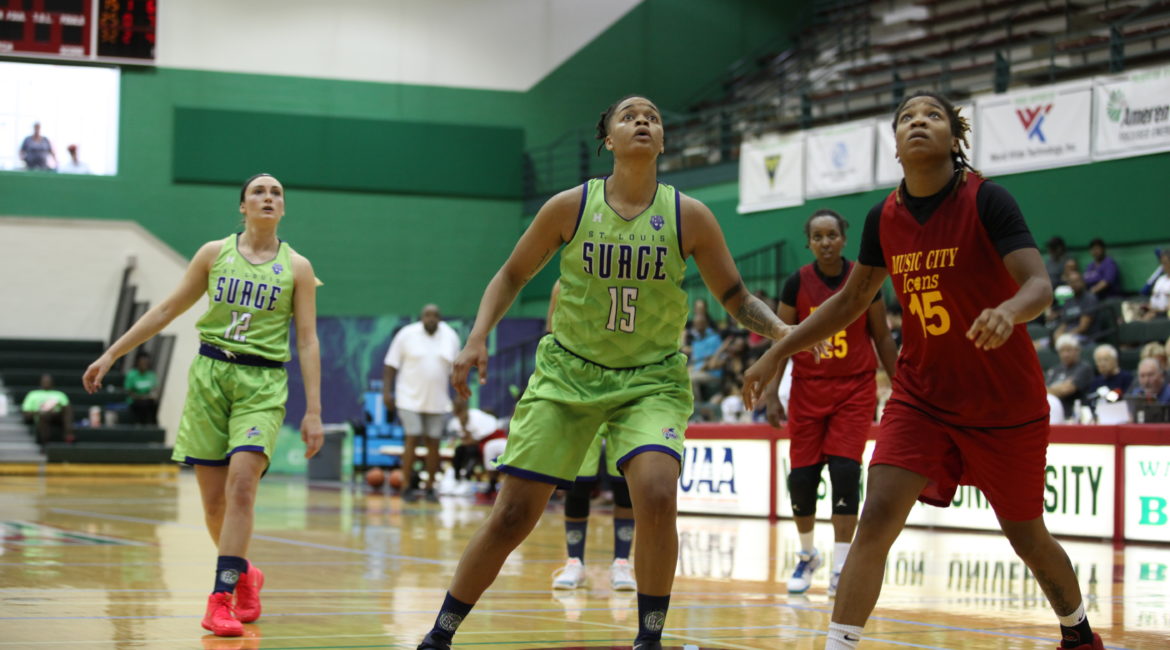 Two weeks of rest was more than enough to rejuvenate the St. Louis Surge. The Surge opened Saturday’s game against the Music City Icons with a 9-0 run. Rebecca Harris scored the Surge’s first five points on a pair of jumpers in halfcourt offense, but after that, the Surge were running, scoring eight of their next 10 on the break. While the Surge’s transition offense was potent throughout the quarter, they connected on just one of their 11 first-quarter 3-point attempts, limiting their lead to just 19-16 one quarter in

The Icons got off to a hot start in the second quarter, immediately vanquishing the Surge lead and bringing the game even at 19. However, the Surge’s luck eventually turned. After missing 14 consecutive 3s, the Surge knocked down a couple in a row. Kristi Bellock also came in to provide a much-needed interior presence, collecting points in the post and creating for teammates. Bellock scored 5 points and tallied an assist in the second frame alone, and by the end of the period, the Surge had once again amassed a lead, holding a 44-38 advantage.

After a fast-paced and contentious half of basketball, Bellock led the Surge with 10 points, while Harris was second on the team with nine and led the squad with four assists. Brea Edwards paced Music City with 10 points of her own.

The Surge charged up the pace even more in the third quarter, and after back-to-back transition scores with about 7:00 remaining in the quarter, the Surge had built a 55-40 lead, forcing Music City to call a timeout to slow the bleeding. After three Icons played the entire first half, the visiting team simply couldn’t keep up with the Surge. As the Surge continued to run, their lead continued to mount, reaching 26 points with 1:00 remaining in the quarter. By the quarter’s end, the Surge had blown the game wide open, owning a 79-55 advantage over the exhausted Icons.

The fourth quarter was over before it started, but that didn’t stop Brittany Carter from draining two more 3-pointers in the first four minutes of the frame, bringing her second-half scoring total to 19, which lifted her to a team-leading 25 for the game. Trey Brooks chipped in an and-one with five minutes left in the game to extend the Surge lead to 31. Music City cut into that lead ever so slightly, but at the final buzzer, the Surge emerged victorious 104-77. Nici Gilday was second on the team in scoring with 17, while Harris led the team with 7 assists. Music City’s leading woman was Edwards with an efficient 23.

With Saturday’s victory in the books, the Surge have lifted their record to 2-2 on the year, leaving them two games behind the first-place Wisconsin GLO and tied for second in the standings with the Flint Monarchs, whom the Surge defeated 105-89 behind 35 points from Rebecca Harris back on June 8th.

The Surge will be back in action again June 30th, taking on the undefeated GLO one final time this regular season. It will be a major test for St. Louis, but if they can ride the wave of positivity surrounding the team after Saturday’s big win, they could become the first team this season to outlast the GLO. The game will be played at Washington University’s Field House and will tip at 3:05 pm. Tickets are available for purchase here and at the door.