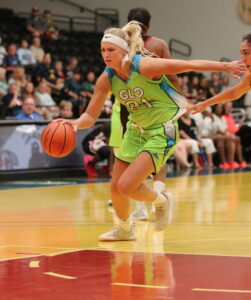 The Wisconsin GLO are the outright regular season champions of the Global Women’s Basketball Association.

The GLO closed out the second quarter with 15 unanswered points over the final 3:30 to extend their lead to 60-40 at halftime. Wisconsin, which led by as many as 25 points late in the third period, maintained a double-digit cushion for the last 21 minutes of the contest during the GLO’s final regular season home game of the year.

With the victory Wisconsin (11-0, 5-0 GWBA) clinches the top seed for the league playoffs that will be held Aug. 10-11. The GLO will host both semifinals and the championship game of the four-team league playoffs in Menominee Nation Arena.

Flint (5-5, 2-1 GWBA) had won each of the previous league titles since the association was formed in 2016. Wisconsin, playing its inaugural season, downed the Monarchs for the third time this year and have won each of its 11 games by at least 14 points.

The GLO’s Jolene Anderson led all players with 19 points Saturday. She shot 8-for-20 from the floor on the way to pacing the GLO in scoring for the second time and recording her eighth double-digit scoring performance in nine games played on the year.

Wisconsin once again featured a balanced offense as Jessica Lindstrom added 14 points, Steph Kostowicz and Mehryn Kraker had 12 apiece, Allie LeClaire had 11, and Sam Logic and Julie Wojta both chipped in 10. The GLO, who produced seven double-digit scorers for the second time this season, have had at least five players with 10 or more on seven occasions.

Lindstrom grabbed a franchise-record 18 rebounds for her team-leading third double-double of the year. Logic had a game-high seven assists to go along with eight rebounds and a pair of steals.

The GLO and Monarchs put on an offensive show during the opening period, combining for 56 points on 56.1 percent shooting from the field. Wisconsin, which had a .609 field goal percentage and a 31-25 advantage after the opening 10 minutes, reclaimed the lead for good at 15-14 on a layup from Wojta at the 3:55 mark of the first quarter.

Wisconsin increased its lead to 33-25 following a Lindstrom basket in the paint on the first possession of the second quarter, but Flint pulled within 41-38 midway through the period on Jasmine McCall’s lone field goal of the game shortly before the GLO responded with 15 consecutive points to close out the half.

Lindstrom sparked the game-changing 15-point run with a layup for a 47-40 GLO lead with just over three minutes remaining in the half. Anderson and LeClaire made layups of their own ahead of a three-point play from Kostowicz that upped the Wisconsin lead to 54-40. The GLO then capped the 15-point blitz with layups by Lindstrom, Kostowicz and LeClaire over the last 48 seconds for a 60-40 cushion at intermission.

An Anderson layup provided the GLO a 70-50 lead with 4:42 left in the third quarter, and Wisconsin owned an advantage of at least 15 point the rest of the way. Wisconsin built its largest lead of the night at 77-52 after a LeClaire layup with 2:15 to go in the third quarter. The GLO reached 95 points with more than two minutes to play but ultimately fell one point shy of scoring at least 100 for the fifth time in the last six games.

Crystal Bradford, the GWBA Finals Most Valuable Player the past two seasons, paced the Monarchs with 16 points off the bench Saturday.

Shareta Brown and Nya Jordan both added 12 points for the Monarchs, who were held without a field  goal for the last five minutes of the game. Jordan also led Flint with eight rebounds, three assists and three steals.

Wisconsin is now averaging 99.5 points per contest on the year and winning by 42.1 points per game. The GLO also defeated the Monarchs in nonleague matchups by scores of 88-58 May 10 and 79-60 May 11 in Oshkosh. The two May meetings with Flint represented the first games in Wisconsin GLO history.

The GLO wrap up the regular season with a GWBA game at Flint on July 28.