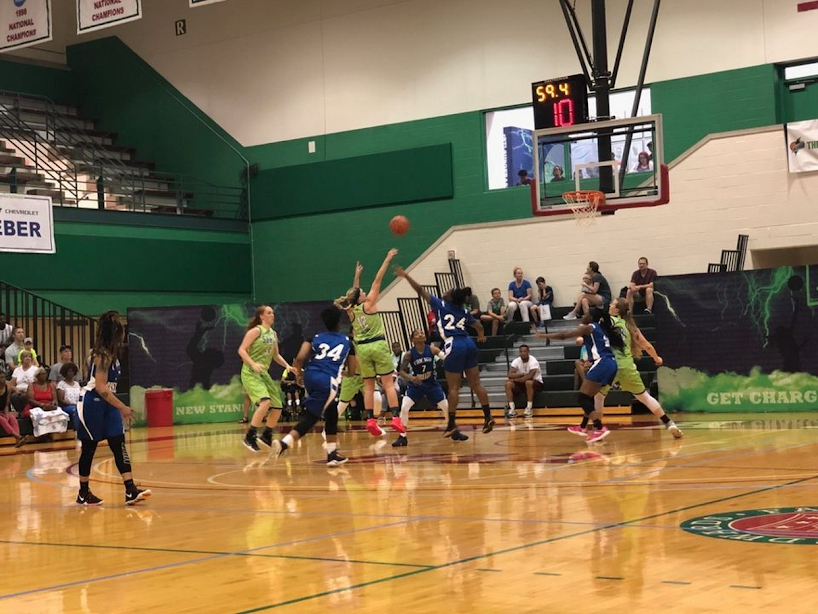 The stands at the Washington University Field House were packed on Saturday as the St. Louis Surge took on the Chicago Breeze in their final home game of 2019. The Surge fed off the crowd’s energy early, jumping out to a 22-6 lead to start the game. They never looked back, continuing to build upon that early burst en route to a convincing 102-72 win.

The Surge opened the scoring with a bucket in the post from Kristi Bellock, who’s been a reliable and efficient scorer for the Surge all year. Throughout the opening quarter, the Surge got contributions from everyone. All of Bellock, Nici Gilday, and Rebecca Harris finished the quarter with four points, while Mikala McGhee, Nakiah Bell, Sydney Bauman, and Leti Lerma all chipped in three. Dominance on the glass on both ends allowed the Surge to pull ahead in the first frame, as they outrebounded Chicago 22-10, including a 7-1 advantage on the offensive end. With difficulty shoring up the glass plaguing the Surge all season, a quarter as one-sided as Saturday’s first led to a comfortable Surge lead of 28-9.

In the second quarter, the Surge continued to build their lead, but the Breeze brought a lot more fight, slimming the rebounding margin, connecting on a pair of 3-pointers and improving their finishing from 2-point range. Gilday pulled ahead of the pack for the Surge, finishing the half with a team-high 11 points and two steals. Chicago’s Bryeasha Blair led all scorers with 12 points while taking just five attempts from the field. Regardless, the Surge maintained a healthy lead as the teams went to their mid-game break with the Surge up 52-28.

Halftime wasn’t nearly long enough for Gilday to cool off, though. The Surge point guard emerged from the locker room to score the team’s first 10 points of the half. Eventually, Gilday needed a rest, which is when the Surge’s significant size advantage came into play. Coach Henderson drew up play after play to force switches, which Bauman and Marina Laramie consistently punished. Behind Gilday’s scoring explosion and an intelligent game plan, the Surge increased to 73-45 by quarter’s end.

It was hard to consider the final quarter of 2019 Surge basketball at the Washington University Field House anything but a formality, but the Surge put on must-watch display of energy and skill anyway. Jaleesa Butler was the quarter’s standout, as she racked up 11 points on perfect 4-for-4 shooting. When the curtain fell on the Surge’s home season, their advantage had swelled to 102-72.

Gilday led all scorers with 23 points, a new high for her in Surge neon, on impressive 6-for-12 shooting and a perfect 9-for-9 effort from the free throw line. Returning to the starting lineup for the first time since the Surge’s season opener, McGhee’s impact on the game was sizable. She led both teams with six assists, which ranked as a new career high for her time with the Surge. She also chipped in two steals and two blocks, continuing to bring the energy and defensive intensity that have defined her time with the Surge. Like at halftime, Blair led the Breeze in scoring when the whole game was in the books with 18.

The Surge won’t be taking to the floor at the Washington University Field House again this season and are off next weekend, but the Surge will be back in action in two weeks on Saturday, July 27th. The Surge will travel to Nashville, where they’ll take on the Music City Icons. The Surge last played Music City at home on June 29th, walking away with a comfortable 104-77 victory. To follow along with the out-of-town action live, you can stream the game here. Follow the Surge on Twitter and Instagram for live highlights and updates.