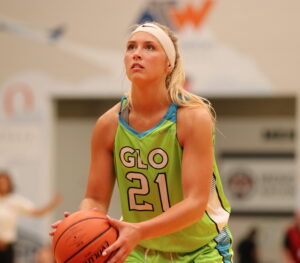 Lindstrom recorded 14 points, a franchise-record 18 rebounds, three assists and a block during the GLO’s 99-79 home victory over the three-time reigning GWBA playoff champion Flint Monarchs on July 13 at Menominee Nation Arena. The win clinched the outright GWBA regular season championship for the undefeated GLO (11-0, 5-0 GWBA) and the top seed at the league playoffs in August.

Lindstrom shot 5-for-11 from the field and 4-for-5 at the free throw line on the way to notching her team-leading third double-double of the year by the end of the third quarter. Lindstrom’s 18 rebounds, which included eight on the offensive end, broke her own previous team record of 15 boards set against the St. Louis Surge on May 18.

Lindstrom is averaging 8.8 points, 11.2 rebounds and 2.2 assists in nine games this season. Lindstrom, who has led the team in rebounding each of the past four games and six times overall on the year, has accounted for six of the GLO’s 10 double-digit rebounding performance during the franchise’s inaugural campaign.

Lindstrom had an All-State prep career at Superior (Wis.) High School before starring collegiately at Green Bay, concluding her All-Horizon Phoenix career with a program-record 41 double-doubles and 1,030 rebounds. The only Green Bay player in the Division I era to register more than 1,000 career points and 1,000 rebounds, Lindstrom ranks among the schools all-time top 10 in points (1,379), made field goals (511) and made 3-pointers (180).

Lindstrom, who helped Green Bay make four NCAA postseason trips from 2015-18, played professionally for T71 Dudelange in Luxembourg this past season, averaging a team-best 20.2 points and 15.1 rebounds on a squad that won the league’s regular season title with a 24-4 record.

The Wisconsin GLO are averaging 99.5 points per game on the year while winning by an average of 42.1 points per contest.

Lindstrom and the GLO wrap up the regular season with a GWBA game at the Flint Monarchs on July 28. The GLO then return home to host both semifinals of the GWBA playoffs Aug. 10 and the league championship game Aug. 11 at Menominee Nation Arena in Oshkosh, Wisconsin.