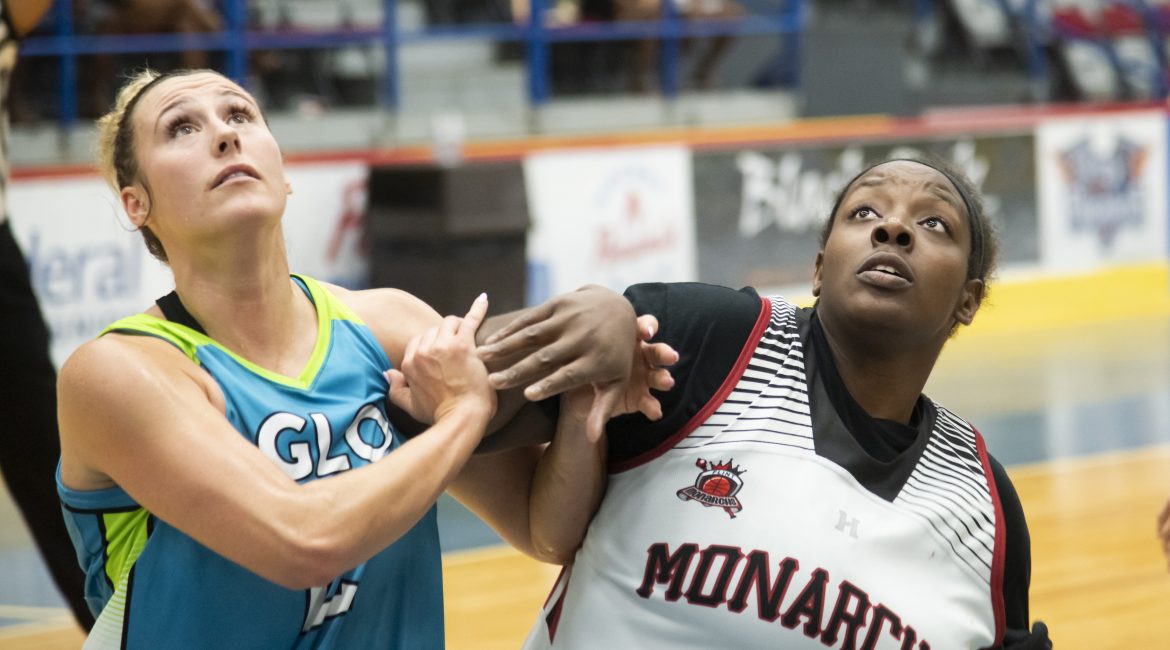 Jolene Anderson poured in a team-leading 22 points, Steph Kostowicz had a season-high 20 in a reserve role and Mehryn Kraker added 17 as the Wisconsin GLO secured a perfect regular season record with a 101-91 victory at the Flint Monarchs on Sunday, July 28.

The Global Women’s Basketball Association regular season champion GLO (12-0, 6-0 GWBA) never trailed in their regular season finale Sunday, racing out to leads of 6-0 and 19-2 during the opening quarter. Wisconsin, which led 47-42 at intermission and 77-69 after three periods, maintained an advantage until Flint knotted the score at 82 with four minutes remaining in the game.

Kostowicz, who scored nine points in the fourth quarter, then provided the GLO the lead for good at 87-84 with a three-point play. A pair of Kostowicz layups extended the Wisconsin cushion to 94-86 with two minutes to go. The GLO went on to hold a lead of at least seven points the rest of the way as they scored each of their final eight points at the free throw line over the last two minutes.

Flint (5-6, 2-3 GWBA), the three-time defending league playoff champion, falls into third in the four-team GWBA standings with one game remaining. Wisconsin, playing its inaugural season, has now accounted for four of the Monarchs’ six losses this season.

Wisconsin will host both semifinals and the title game of the GWBA playoffs Aug. 10-11 at Menominee Nation Arena in Oshkosh, Wisconsin.

The GLO had five double-digit scorers Sunday, including Jessica Lindstrom with 12 points and Julie Wojta with 11. Allie LeClaire and Sam Logic chipped in nine and eight points, respectively, for Wisconsin.

Wisconsin jumped out to a 6-0 lead in the opening minutes behind an Anderson jumper and four straight points from Kraker. After a pair of Monarch free throws, the GLO rattled off 13 points in a row. Wisconsin’s run, bookended by Wojta and Lindstrom layups, featured six points by Wojta and five from Lindstrom.

Kostowicz scored her lone points of the opening period on a basket in the paint that increased the GLO lead to 24-6. However, the Monarchs cut its deficit to 24-12 after the first quarter and to 31-28 early during the second period following a prolonged 21-4 run. Kostowicz then accounted for each of Wisconsin’s next seven points as the GLO upped their advantage to 38-33 before a pair of Anderson 3-pointers provided a 44-39 lead.

A Wojta layup extended the GLO lead back to double figures at 58-48 early in the third quarter, and a bucket in the lane from Kelly Moten gave Wisconsin a 77-67 cushion in the final minute of the period in which the teams combined for 57 points.

Wisconsin appeared to be cruising to another win after Anderson’s 3-pointer increased the lead to 82-72 in the fourth quarter, but the Monarchs responded with 10 unanswered points to knot the score for the first time at 82. Tied for the second and final time at 84, Kostowicz gathered and finished through contact in the paint before knocking down the subsequent free throw, giving the GLO an 87-84 lead they would not relinquish.

Kostowicz, the sixth different GLO player to score at least 20 points this season, later capped her best scoring performance of the year with two layups in a row that upped the Wisconsin lead to 94-86.

Anderson, averaging 15.1 points per game on the year, led the GLO in scoring for the third time this season.

Flint’s Arlesia Morse led all players with 26 points while Crystal Bradford contributed 18 for the Monarchs, Jasmine Thomas had 11 and Sparkle Taylor chipped in 10.

Wisconsin previously defeated Flint by scores of 88-58 and 79-60 during preseason games May 10-11. The GLO also downed the Monarchs, 99-79, in a GWBA contest July 13. Each of the previous three meetings were held in Oshkosh.

The GLO, who surpassed 100 points for the fifth time this year and average 99.6 points per game, have produced at least five double-digit scorers on eight occasions. Wisconsin, which has won each of its 12 games by double figures, is winning by an average of 39.4 points per contest heading into the GWBA playoffs.