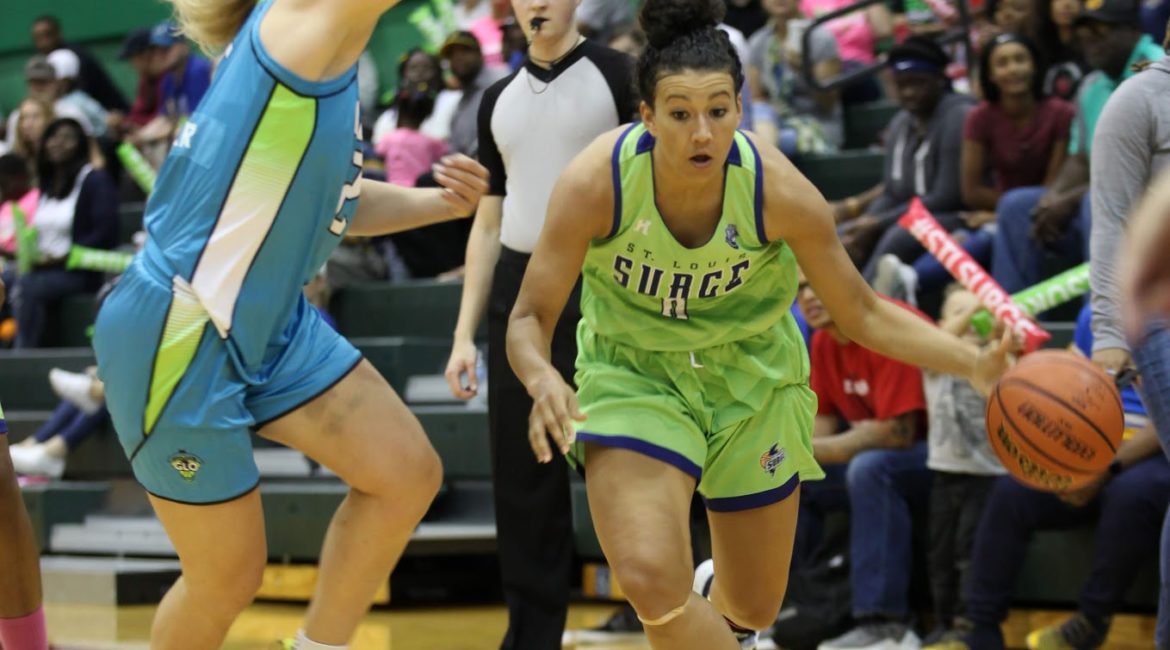 On Saturday evening, the Surge took to the court outside of Missouri for the first time since May, as they met the Music City Icons in Nashville. Music City entered the game 0-5, but winning never comes easy on the road, and the Surge absolutely needed the win in their fight for seeding that will culminate next week against the Monarchs in Flint. The Surge were tested, but ultimately rose to the occasion, heading home from Nashville with an indispensable 94-64 win.

Nici Gilday picked up exactly where she left off two weeks ago in the Surge’s home finale, when she scored a game and season high 23 points. She netted the game’s first points with a 3-pointer, and continued to torch the Icons for the rest of the period, connecting on four of seven 3-point attempts, besting her previous game-high of three 3-pointers in just one quarter.

Throughout the quarter, the Surge imposed themselves on the offensive glass, creating opportunity after opportunity. But it was Gilday who remained the story, as her dominance sustained throughout the quarter, eventually closing the opening frame’s scoring with a gorgeous transition take, weaving in and out of traffic, and giving the Surge a 24-18 advantage (and 14 points of her own) at the end of one.

St. Louis started the second quarter hot, quickly growing its lead to 35-22 with 5:22 remaining in the half. In quick succession, Rebecca Harris nailed a 3-pointer from outer space as the shot clock dwindled and Nakiah Bell collected two more on an uncontested runout, and the the Surge lead swelled to 42-24 at the 3:12 mark. By the end of the half, Music City had cut into the Surge lead a bit, closing the half trailing 47-32, but the Surge lead was still comfortable.

Halftime did nothing to cool the Surge, as they came out and immediately scorched the nets. Harris hit a pull-up 3 to open the quarter’s scoring, Gilday knocked another down, Harris hit once more, and Mikala McGhee chipped one in as well, forcing the Icons to call timeout with 7:05 to go in the quarter, trailing 61-37. The Surge advantage continued to grow as the time ticked off the third quarter, behind heroics like a pair of silky smooth 3-pointers from Nakiah Bell. When the quarter came to a close, the Surge found themselves ahead 75-47.

Just as they had hoped, the fourth and final quarter was all but a formality for the Surge. The Surge lead grew by a tick in the fourth, and when the final buzzer did its thing, the Surge were ahead 94-64. A second-half explosion of seven 3-pointers elevated Harris, the team’s leading scorer on the season, to game-high with 27 points, all on 3s. Gilday chipped in 22 of her own, as she continued to cement herself as one of the team’s stars.

The Surge will be back in action in next week on Saturday, August 3rd. The Surge will travel to Flint, where they’ll take on the Monarchs in a pivotal game to decide who will earn the GWBA’s number-two seed in the following week’s Championship weekend. The Surge last played Flint at home on June 8th, walking away with a contentious 105-89 victory. To follow along with the out-of-town action live, you can stream the game here. Follow the Surge on Twitter and Instagram for live highlights and updates.