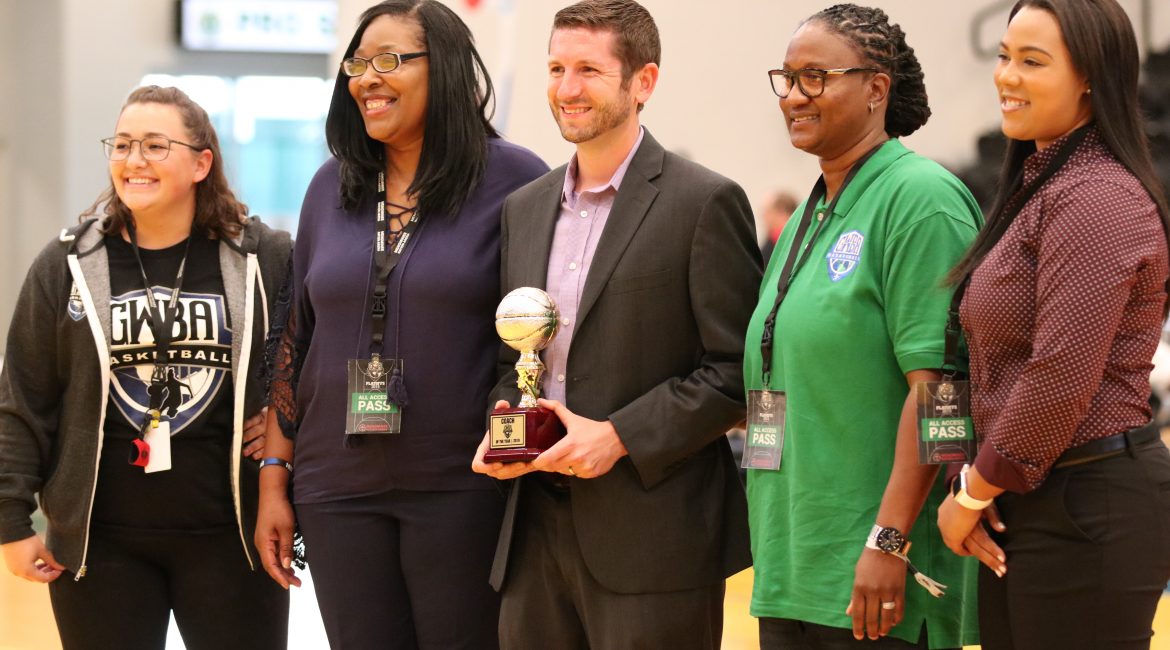 Oshkosh, WI-August 11- The Global Women’s Basketball Association (GWBA) proudly announces its Coach of the Year recipient for the 2019 season.   Dan Carey of the Wisconsin Glo received the most votes among the league coaches and is this seasons honoree for Coach of the Year.

“The Wisconsin Glo have shattered nearly every league team record on the books this season,” said Drey Wynn, Chief Executive Officer of the GWBA.  “Coach Carey has proven to be a masterful coach who understands the game and knows how to win.”

Team facts and accomplishments of the Wisconsin Glo for the 2019 season under Head Coach Dan Carey:

The Wisconsin Glo finished regular season play at (12-0, 6-0 GWBA) and clinched a number 1 seed heading into the national tournament.

The GLO have won each of the franchise’s first 12 games by an average of 39.4 points on the strength of a balanced offense that has featured five different leading scorers (Jolene Anderson, Mehryn Kraker and Gabbi Ortiz thrice; Taylor Wurtz twice; Allie LeClaire once).

All 15 members of the GLO who have appeared in more than five contests this year have scored at least nine points in a game. Wisconsin’s star-studded roster has combined for 57 double-digit scoring performances overall and eight games in which at least five players have scored 10 points or more.

Nine GLO players are averaging more than nine points per game and 20 different players who have contributed points for Wisconsin this season. Anderson leads the team with 154 points on the year while LeClaire (132), Kraker (118), Wurtz (111), Sam Logic (95), Ortiz (92), Jessica Lindstrom (91), Steph Kostowicz (83) and Julie Wojta (82) have each added more than 80 points. GLO team leaders also include Lindstrom with 105 rebounds, and Logic with 45 assists and 19 steals.

Wisconsin has surpassed 100 points during five of its last seven games, including a team-record 128 points against Music City on June 22. In eight home games, the GLO are scoring 101.4 points per game and winning by an average margin of 46.1 points per contest.

The GLO have faced just one fourth-quarter deficit on the way to their undefeated regular season. Flint held a 52-49 advantage on the GLO’s home court entering the final period May 11 before Wisconsin outscored the Monarchs, 30-8, over the last 10 minutes.

The Wisconsin defense, which held its first nine opponents to 70 points or fewer, has given up 10 points or less in a quarter 11 times. The GLO owned a 31-0 lead in the second quarter against the Chicago Breeze on June 8 and a 34-5 advantage after one period against Music City on June 22.