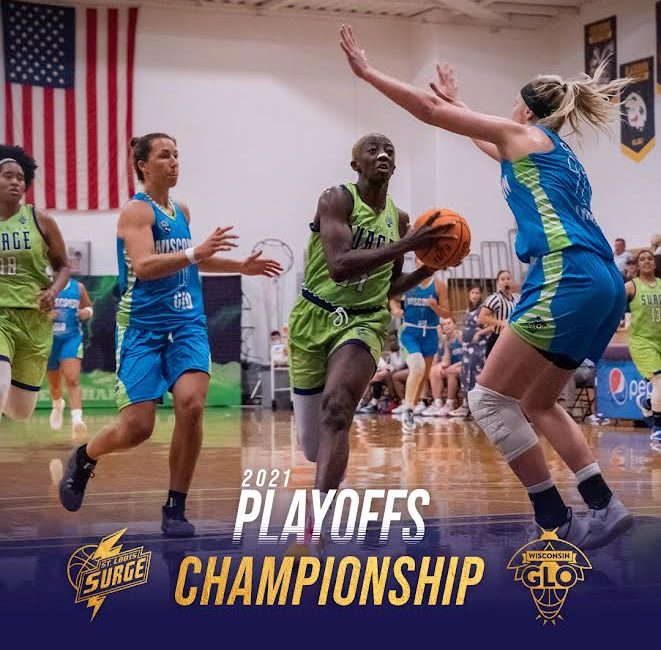 Although it was a brief glimpse, Alisia Jenkins has been to the peak of professional women’s basketball as a WNBA player, and she not only wants to get back but to stick.

Kristi Bellock was part of a national championship team at Texas A&M, and many of their teammates with the St. Louis Surge played college basketball in the Big Ten Conference.

Playing for the Surge in the Global Women’s Basketball Association is just one of the steps all have taken during careers that have created myriad opportunities, mostly overseas. On Sunday, they were hoping to add a GWBA championship to their resumés.

But the Wisconsin Glo arrived with a similarly high level of talent and ended the Surge’s unbeaten season with a 93-77 win Sunday in the four-team league’s championship game, at Fontbonne University.

“Short of the WNBA, when you get to the top of our league, there’s no other professional basketball in the country like this,” Surge coach Duez Henderson said. “It’s high level. You get the most talented players from different areas and try to mold them. While this (stinks) for the franchise and me and the players, I think the league is going in the right direction, and that’s what matters.”

The Surge defeated the Glo twice while posting a 10-0 record before Sunday. They led by two points at halftime but were outscored 31-15 in the third quarter by Wisconsin, which built a 20-point lead in the fourth.

Jenkins showed why she was able to play briefly with Phoenix in the WNBA, finishing with 21 points and 15 rebounds. University of Illinois and Mascoutah High product Rebecca Harris scored 17 before leaving because of an injury.  Erin Bollmann, who played at Southeast Missouri State, had 17.

“It hurts when you beat a team twice and know you have all the tools to beat them this time,” Jenkins said. “But I think every lady that touches the court has the ability to play in the (WNBA). They just have to have confidence in their game and do what they do well and be great at it. Between this and the WNBA, I think it’s really kind of the same in that we’re just hard-working girls.”

Wisconsin had plenty to match the Surge, especially guard Kelly Moten, who scored 30 points and was named the game’s MVP. The Glo also had the likes of Sam Logic, who was an All-American as a senior at Iowa, and Allazia Blockton, the career leading scorer for Marquette.
The Glo’s roster is largely rooted in Wisconsin, with seven players who played collegiately at the University of Wisconsin, Wisconsin-Green Bay, Wisconsin-Milwaukee and Marquette. They also have Wisconsin native Logic, who was a first-round WNBA draft pick in 2015.

The Surge, meanwhile, get their players from a wider territory. Harris and Brittany Carter (Incarnate Word) have ties to the St. Louis area. Since leaving Illinois, Harris has played professionally in the Czech Republic, Poland, Turkey, Germany, Ukraine and Greece.

“When I first joined, we were kind of small time and most people hadn’t heard about this type of league,” Harris said. “People graduate college and want to play at the next level, and if they don’t play overseas there are leagues all around. This league has really developed and you’re seeing the best of the best.”

The Surge rolled through the league and Henderson was named the coach of the year, receiving his award after the championship game.

He saw his team take an early seven-point lead and protect it throughout the first half on the strength of Jenkins’ inside play and perimeter shooting. After Harris and Carter hit 3-pointers to keep the game tied early in the third, Wisconsin went on a 19-5 run.

“Obviously, they played well,” Henderson said. “All the games we played against them were close, and they were definitely going to be a battle. It was just a stuck-in-the-mud feeling. We tried different rotations and challenged them in different ways.”

Wisconsin had to play Saturday in the semifinals to reach the championship game. St. Louis advanced when Detroit had to forfeit because of injuries and COVID-19 exposure.