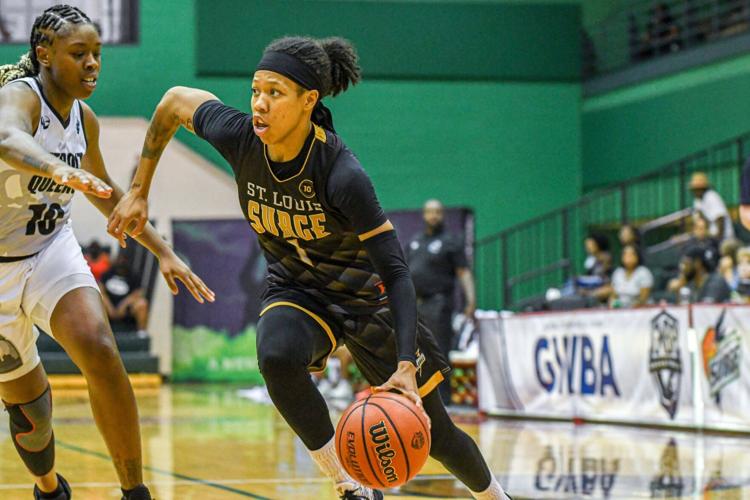 he St. Louis Surge of the Global Women’s Basketball Association opened this season in a very uncharacteristic way — with three consecutive losses.

But that’s all forgotten now.

This weekend in Flint, Michigan, the Surge (6-4) will carry a five-game winning streak into the GWBA’s championship tournament. They are seeded second, behind the two-time defending league champion Wisconsin Glo (8-3).

In their 10th season, the Surge will take on the Flint Monarchs (6-6) at 5 p.m. Saturday, after the Glo squares off with the Detroit Queens (3-6) earlier that day at Mott Community College. Saturday’s winners will meet at 1:30 p.m. Sunday for the championship.

The Glo upset the Surge 93-77 in the GWBA championship game last year at Fontbonne University. The Surge finished that season at 10-1.

“With just two players back from last year, we knew it would take some time,” said first-year head coach Petra Jackson, who served as a Surge assistant coach in 2013 and 2014. “But as the season moved on, as expected, we got better and better. We talked a lot to players about their roles within the team and slowly but surely we developed into a strong squad with a lot of talent and a lot of depth.

“We’re looking forward to the weekend and to hopefully finishing strong.”

Jackson, who starred at University City High and at Southern Illinois University Carbondale, is assisted by associate head coach Justin Tatum, who starred at CBC and at St. Louis University and now runs the high school program at CBC. Jerome Douglas Jr., who coaches at Cardinal Ritter Prep, also plays a key role for the Surge.

Their roster is deep and talented. The leader is point guard Sug Sutton, who starred at Parkway North High and went on to a solid career at the University of Texas, where she was twice earned All-Big 12 honors. The 5-foot-8 standout was drafted in 2020 by the WNBA’s Washington Mystics.

She was cut and later re-signed with the Mystics, playing in 12 games as a reserve in the 2020 season.

“Getting back to the WNBA is definitely on my mind,” said Sutton, 23. “But right now, my focus is on doing whatever I can to help the Surge finish strong. I love being back home and getting a chance to play here in St. Louis in front of my family and friends. I was just a little girl when I first came out to watch the Surge in their early days, so being a part of this and getting a chance to play for (Surge owner Khalia Collier) is special for me. This team has come a long way through this season and I feel like we’re on a little bit of a roll right now.

“The Wisconsin Glo are a strong and very talented team. Hopefully, we’ll get another shot at them.”

The Glo beat the Surge in the teams’ first three meetings this season. But on a late basket from Sutton, the Surge upended the visitors 101-100 on July 23 at Washington University.

“It took our players a minute or two to realize the pro game is a little different,” Jackson explained. “Honestly, I think those losses at the beginning of the season did us some good because it helped our players adjust. But once they realized they were professionals and had to approach the game a little differently, we’ve seen the difference.”

Sutton, who will leave for Poland for her third season overseas once the Surge season wraps up, has formed a quick bond with returning Surge standouts Brittany Carter (Incarnate Word/Illinois) and Kelsey McClure (Arkansas Tech).

“We believe in each other, they trust each other; that’s huge,” Jackson said. “They do a great job of getting the ball to the player who’s hot. It’s fun to watch, but there are times I wish some of them were a little more selfish.”

The coach referred to Sutton “as the type of player you can’t scout.”

“She’s a dangerous, exciting and dynamic player,” Jackson said. “You end up with a scouting report that’s five pages long or you just let her play and try to focus on stopping the players around her.”

Selfishly, Jackson would love to keep Sutton playing for the hometown team. But that wouldn’t be fair to Sutton.

“Do I want Sug back with us next year? Absolutely. But does she belong in the WNBA? Absolutely,” the coach said. “And I’ll do whatever I can to help her get that opportunity.”

But Sutton’s focus is on the weekend.

“Getting a chance to play at home, in front of my family and friends, has been special and I’d love to finish it off with a championship,” she said. “Over the course of this season, we’ve definitely grown as a team. This weekend, I guess we’ll find out if we’ve grown enough.”